Befriend the god of the Underworld in Hades Gigablox!

Rule the Underworld and collect the souls of the perished! 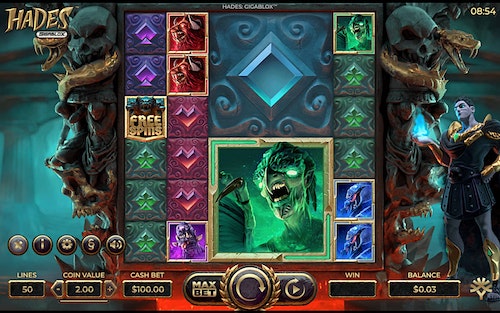 Ride the boat of Charon and head to the deepest depths of the Underworld to meet the god of the dead himself in the Hades Gigablox crypto game by Yggdrasil! As you venture through this nail-biting journey, prepare for over-the-top excitement and equally impressive bonuses and prizes. When you boot up this fun and rewarding slot game, you’ll have an amazing time spinning the reels while aiming to win tremendous payouts.

If you’re lucky enough, you can be the lucky adventurer to win the most coveted Hades Gigablox max win of €1,112,900! This task can only be done by the strongest warriors, but don’t be discouraged since you’ll have assistance from the King of the underworld along with his bonus symbols and features.

Moreover, take advantage of the appealing Hades Gigablox RTP of 96% and bring home as many treasures from this barren wasteland as possible. To begin your journey, you must first place a wager between the minimum bet of 0.10 coins and the maximum bet of 100 coins.

Hades Gigablox slot review: Find beauty in the land of the dead

From all the depictions of the Underworld in novels, movies and other forms of media, this land has always been described as looking hopeless and dead. Although these two descriptions are indeed true, Hades Gigablox differs from other iterations since it’s made more beautiful thanks to Yggdrasil’s game design.

Here, you’ll find the land of the dead decorated with vibrant colours from the background down to the individual symbols on the reels. Speaking of the background, you’ll find colossal pillars and rock formations surrounded by a mysterious blue-green mist which adds ambience to Hades Gigablox.

As for the slot machine itself, the frame is designed with eerie skull-shaped stones and  golden serpents that are wrapped around the skulls. Lastly, standing tall beside this slot machine is the titular god himself, Hades, who’s here to help you win more prizes.

Aside from holding the eternal blue flame, Hades also quips some witty one-liners from time to time which makes the game extra entertaining.

You can experience all of these when you play this game. If you're not yet ready to wager real money, you can take advantage of the Hades Gigablox demo to spin the reels for free.

Hades does indeed live up to his nickname of ‘the Giver of Wealth’ as seen in this thrill and fortune-filled slot game. With him by your side, you can be granted amazing payout values with the help of his powerful bonus features.

Achieve this by collecting the symbols found in the fiery depths of this world and landing them in winning combinations on any of the 50 Hades Gigablox paylines.

What is the RTP of Hades Gigablox?

Gates of Olympus has an appealing RTP of 96%.

What is the volatility of Hades Gigablox?

The volatility of Gates of Olympus is high.

What is Hades Gigablox’ max win?

What are the minimum and maximum bets on Hades Gigablox?

The minimum bet is relatively low at 0.10 coins and the maximum bet is 100 coins.

Ride the ferry over the River Styx and head towards the kingdom of Underworld in Hades Gigablox. Together, rule over the land of the dead as you collect some of the most valuable Gem Rocks and treasures the perished has to offer.

Before you wager any money from your pockets, get a feel for the game when you try the Hades free play. After you’ve gotten your bearings, it’s time for you to place your bets and spin the colourful reels of this amazing slot game!

Make haste and deposit now and find the Vault of Fortune buried deep beneath the Underworld where you can win up to €1,112,900!

A galaxy of gaming awaits! Find your ultimate favourites right here at Slots.io.

A multiverse of prizes and gifts await you in Gemix 2!

Risk-free betting bonuses: Is it real or just a myth?

The ins and outs of blackjack shuffle tracking

Enter the Gates of Olympus and win godly prizes!

Infinity Reels in slots: What are they and how do they work?

Discover the riches of El Dorado in Gonzo's Quest Megaways

The best jackpot slots to play for massive wins

Slot tournaments: what is it and how does it work?

Geisha’s Fan slot: Where secrets of the orient await

Roulette prediction formula: Can you guess the game outcome?

You deserve all the fame and glory in the Book of Vikings slot!

Befriend the god of the Underworld in Hades Gigablox!

Risk-free betting bonuses: Is it real or just a myth?

The Charm of the Cluster Pay System