Slots.ioBlogSlotsReap the rewards with Jack and the Beanstalk

Reap the rewards with Jack and the Beanstalk

Relive your childhood when you spin NetEnt’s casino slot Jack and the Beanstalk. Following the story of one of the most beloved fairy tales, the developers recreated the story of Jack in the form of a slot game. You’ll enjoy spinning this video slot because it features stunning illustrated visuals straight out of a fairytale book and you can have the chance to win up to 1,000 credits!

Join the adventurous Jack in his adventure as he explores the reels. He needs to escape the clutches of the two-headed giant when you wager on this high-volatility video slot. Take home various rewards from Wild, Scatters, Free Spins that you can unlock on the reels. Be a dedicated adventurer because this slot game can grant you a jackpot worth up to 1,000 credits!

Jack and the Beanstalk slot features 5 reels and 20 paylines that contain the rewarding magical symbols in the game. Access all the fun and magic when you wager between 0.01 and 0.5 credits. Be a persistent spinner because this video slot can grant you a jackpot worth 1,000 credits!

Take the fun and adventure with you anywhere because you can access this video slot using your mobile, PC, or tablet.

Jack and the Beanstalk slot features various symbols spread across the reels. Set in the farm where Jack grew up, you can find goats, axes, watering cans, and beans as the paying symbols in the game. Meanwhile, the high paying symbol on the reels is the formidable giant residing in the clouds.

For the high paying symbols, you will see different farming tools such as the goat, axe, watering can, and the magical beanstalks. Reap your rewards from these items because they can grant you high payouts when you arrange them in a winning combination.

Magical features of Jack and the Beanstalk 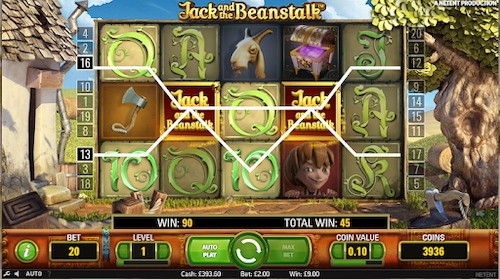 Jack and the Beanstalk slot is teeming with rewarding bonuses and features that you can activate when you form winning combinations on the reels. The story begins in front of Jack’s house where you can see the tall beanstalk tree towering over the small patch of land owned by Jack and his family.

The reels of the game are made from simple borders. Below the reels, you can see a golden frame with intricate carvings where you can access the spin butting, coin value, and the number of wins you have. You can also see the information button where you can see the details and information you want to know about the game.

The game features a Treasure Chest symbol is the Scatter symbol that can trigger the Free Spins feature. Land this symbol more than three times on the reels and you’ll get the chance to increase your gold.

Activate the 10 Free Spins in the game when you land at least three or more treasure chest symbols. If you obtain the Key during this feature, you can unlock the 2 stacked money bags, 3-stacked golden hens, and expanding golden harps.

Other than the Scatter wins, you can also take home rewards from the Wild symbol. Once the Wild Logo appears on the reels, it can replace all the paying symbols to form more winning combinations. Additionally, if you land the Wild symbol on any winning line, it can triple the highest-paid line.

NetEnt’s slot game Jack and the Beanstalk was released in 2013. This 5-reel, 20-payline slot can give you an exciting adventure in a magical world where giants, beanstalks, and castles in the sky exist. Enjoy the country music playing in the background as you venture inside the reels of this video slot.

With its illustration-like design and carefully crafted graphics, Jack and the Beanstalk is a video slot that you will keep coming back to. The beautiful adaptation of the classic fairytale in the form of a slot game will surely entice you to spin more!

Jack and the Beanstalk is an immersive slot game that you’ll surely enjoy. If you want to take a trip down memory lane, spin this masterpiece by NetEnt and take home various rewards and a jackpot worth 1,000 credits along the way! Read more reviews on different video slot games when you visit Slots.io.

The Charm of the Cluster Pay System